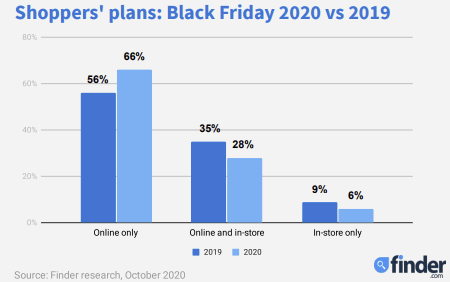 Across the UK shoppers are expected to spend an estimated £6 billion on Black Friday this year, according to annual research from shopping comparison site, finder.com.

Despite the amount being spent increasing, the number of those who plan to partake in the sales is decreasing. Last year, 22.1 million (42%) said they planned to buy something on Black Friday, whereas 20.3 million (39%) expect to do so in 2020. This 8% decrease is likely a result of the financial hardships many have suffered due to the coronavirus pandemic.

However, 16.3 million (31%) are still undecided about their participation meaning the overall figure of sale participants could increase to 36.6 million.

Table of Contents show
Where will purchases be made?
Who is going to be spending the most?

Where will purchases be made?

Lockdown meant consumers became more familiar with online shopping and as the pandemic continues to linger, shoppers are more likely than ever to shop online. Last year, 56% of Black Friday shoppers said they would take part in the sale online, this has increased by 10 percentage points to 66% in 2020.

However, not all Black Friday shoppers are planning to ditch stores. The research found that 28% of shoppers will shop both online and in-store, but this is a fall from 35% last year.

This means that 94% of shoppers will purchase items online in 2020, while only 6% of customers plan to just shop in-store. This is a drop of 3 percentage points since 2019.

Who is going to be spending the most?

When it comes to generational differences, millennials plan to spend the most with an average spend of £372, while gen Z will spend the least as they plan to part with just £130 on Black Friday. Despite this, gen Z plan to make the most of the yearly sales, with 59% intending to shop on Black Friday, which is a higher percentage of participants than any other generation.

Londoners intend to spend the most, with the average spend being £126 above the national average of £296 (they will spend £422), while those in Yorkshire and the Humber plan to spend the least (£249).

The full paper, Black Friday 2020: How one day became a month, includes expert commentary from industry leaders and can be viewed and linked to here.

“With the pandemic and lockdown causing such disruption to people’s lives and careers, you might expect people to shut their wallets this Black Friday weekend and for overall spend to fall. While this does appear to be the case in the sense that the number of people participating is predicted to decrease, overall spend is actually set to be higher.

“This means those taking part will be spending significantly more than last year and is perhaps an example of how Britain is becoming financially divided. Many have experienced great financial difficulty this year, but some people are actually better off as a result of not having to commute and a lower spend on socialising. For these people, the weekend of sales could be an opportunity for some retail therapy.”

“Many of those who plan to shop on Black Friday wait until Friday to purchase their items however most deals are live in the week leading up to it. Shopping earlier on in the week could avoid disappointment of items going out of stock. It’s also important for shoppers to be aware that just because it’s discounted on Black Friday doesn’t mean it isn’t cheaper at other points throughout the year. In fact our research last year showed that a quarter of products increased in price during Black Friday, so if possible try to keep track of prices throughout the year – or start now.”

Finder commissioned Onepoll on 9 to 14 October 2020 to carry out a nationally representative survey of adults aged 18+. A total of 2,000 people were questioned throughout Great Britain, with representative quotas for gender, age and region 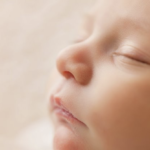 Table of Contents show
Where will purchases be made?
Who is going to be spending the most?