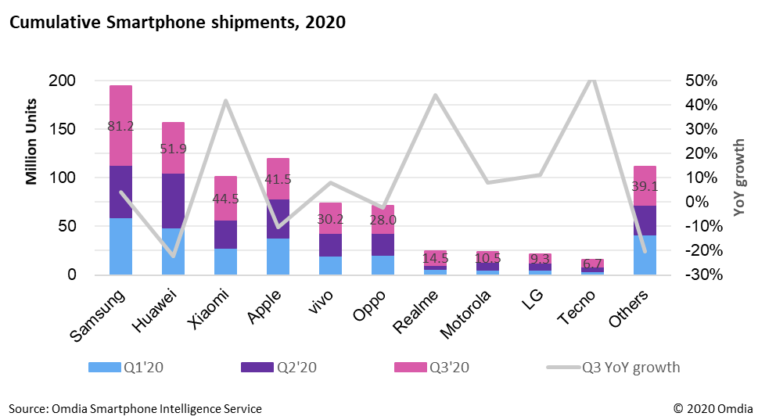 The global smartphone market was able to recover from a tremendously difficult first half of 2020. The 0.9 percent year-on-year decline in Q3 is a significant improvement over the over 15 percent, and worse, declines in each of the first two quarters of the year, according to Omdia’s latest global smartphone shipment preliminary result.

Global shipments reached 357.4 million units in the quarter – down from 360.8 million units in Q3 2019. Quarter-over-quarter, shipments increased 28 percent from 279.7 million units in Q2 2020. Strong performances by OEMs like Xiaomi, Realme, vivo and Transsion brands, show that some markets have recovered from the initial pandemic shock better than other regions.

At the top of the leaderboard Samsung regains its position as the largest smartphone OEM, shipping 81.2 million units in the quarter, 50 percent up from 54.3 million units in Q2 2020 and 4 percent higher than a year ago. As many countries eased lockdown measures and resumed economy activities, Samsung was able restore smartphone shipments. A complete product portfolio drives Samsung’s overall volume increase, with flagship devices delivering a revenue lift.

Apple, in fourth place, shipped 41.5 million units – a 10.2 percent decline YoY. This year, Apple delayed the launch of its latest generation of iPhones until mid-October, impacting shipments in Q3 as the new models will not reach consumers until the last week of October. Additionally, Apple is staggering the availability of its four new models, with the iPhone 12 mini and Pro Max not launching until the beginning of November. In Q3 2019, Apple shipped 46.2 million units. Quarter-over-quarter, Apple shipments grew five percent thanks to strong demand of iPhone 11 and newly launched iPhone SE.

The performance by OEMs like Realme, Xiaomi and Tecno highlight the fact that some markets can snap back from the deepest impacts of the global pandemic outbreak faster than others. Realme, for example, has been growing in India since spinning out from OPPO. The company’s other international markets are not as well developed as India. Similarly, Xiaomi has been a market leader in India for some time. Delivering 54 percent QoQ growth shows that this market is experiencing a renewed growth after a severe lockdown period.

The OEMs growing this quarter all have broad product portfolios in the mid-range and entry-level segment. After facing severe lockdown measures earlier in the year, consumers are now spending money on new handsets which enable new features and functionalities for the new normal. 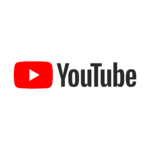 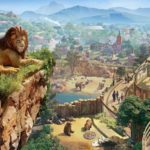